I’ve been crafting a number of short stories over the last few months, in between my work on a series of novellas (more on that below), that I hope to begin releasing in the next few months. And a number of those short stories—some of which I am submitting to literary journals and magazines, some of which I intend to self-publish—have dealt with some pretty heavy subject matter.

So I decided to have a bit of fun, and write something a bit less serious. Enter A Book With No Pictures, a short, raunchy, and comedic tale about a dysfunctional relationship between a middle-aged man and his gifted, orphaned, five-year-old nephew, whom he adopts.

Check out 'A Book With No Pictures.' It's a comedic tale—aka short story—of dysfunction written by author Brent Jones.Click To Tweet

I knew, going into this, that A Book With No Pictures wouldn’t be everyone’s cup of tea. But if you have kind of a deranged sense of humor like I do, it might be right up your alley. 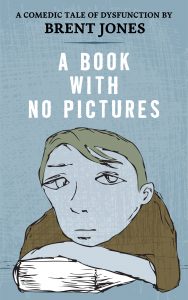 He’s pushing forty. He drinks. He smokes. He eats snack cakes for breakfast. And he’s the sole guardian of his orphaned nephew, Spencer.

But Spencer isn’t just any five-year-old. He’s a child prodigy, and living together requires compromises that neither uncle nor nephew are prepared to make.

This short story, from the author of Fender and The Fifteenth of June, is teeming with raunch and dark humor, mocking the old adage that blood is thicker than water.

A Book With No Pictures also introduces readers to children’s librarian, Afton Morrison, the subject of an upcoming thriller series, also set in the fictional town of Wakefield.

Where can I buy it?

A Book With No Pictures retails almost everywhere eBooks are sold for just 99 cents USD. It is available for pre-order now, with a release date of February 5, 2018, and it’s about 6,700 words long. Here’s a list of retailers to choose from:

And remember, please rate it even if you hate it, both at the original retailer where you purchased the book, as well as on Goodreads.

Wait. Who is Afton Morrison again?

A children’s librarian named Afton Morrison, from the fictitious town of Wakefield—the setting for both The Matchbook and An Honest Day’s Work—makes her first appearance in A Book With No Pictures. This was done on purpose, as Afton will be the central protagonist (of sorts) in the upcoming series of novellas I’m working on.

I had a reader tell me it would be fun if I shared a bit more personal stuff on my blog.

So, in A Book With No Pictures, five-year-old Spencer is described as being chunky, wearing short sleeve plaid shirts tucked into corduroy pants. His appearance is based in part off this photograph of me at three years old: 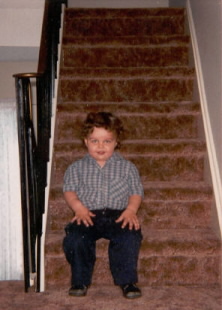 Sigh… I don’t know how much more personal I can get than that.